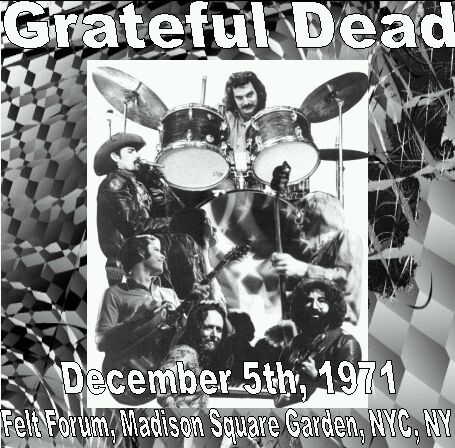 -q
Reviewer: tony_merolla - favoritefavoritefavoritefavoritefavorite - December 6, 2012
Subject: If Rock and Roll Was Gonna Have a Godfather...
On this, the anniversary of this wonderful show, I thought I would re-post the review I did for the other (fantastic) archive of this show - http://archive.org/details/gd1971-12-05.fm.matera.100316.sbeok.flac16

"I LOVE this show! This was kinda my "first" show - although I didn't actually attend, I listened to the simulcast on WNEW, and spent countless hours over the years listening to pretty poor recordings of it. To this day, it remains one of my all time faves. I don't think it's a great show in the sense of having long, spacey 2nd-set jams (although the Dark Star jam is pretty amazing) but what makes it great for me is the perfect renditions of what are usually 1st-set songs, especially those that are brand new here. Jerry's phrasing during these songs is just incredible! Songs like Jack Straw, Tenn. Jed, Ramble On Rose, Brown Eyed Women - I always thought these versions were so much better than those that would appear on Europe '72. Big Railroad Blues is sizzling and love the Going Down the Road with the China Cat tease! Late '71 has to be one of my favorite eras. Nice to find something where the sound is so much better than on the tapes I grew up with. A big "thank-you" to Don Rohde & Phil Matera for making this available."

Though there were many exciting moments to come, it was all downhill from here.

Go here for the opening act (NRPS w/Jerry Garcia on pedal steel):
http://www.archive.org/details/nrps1971-12-05.shnf
Reviewer: swinter - favoritefavoritefavoritefavoritefavorite - January 22, 2011
Subject: my first one
these Felt Forum concerts were my first GD concerts; we went one night and listened to the simulcast on WNEW FM (WPLJ was sooo later . . . and so less cool) the other night. WNEW then rebroadcast the entire concert, NRPS and Dead, New Years Eve 1973 -- which, of course, all we serious Deadheads recorded.

I had these tapes for many, many years -- a kind of prize posession. but by 1998 some of the cassettes were no longer playable. thank goodness for the internet! it's like having an old friend back.

Songs listed in the description do not match the Download and Streaming lists.

The recording and mix sounds like I remember hearing it "live" on the radio in NYC in 1971.

My first GRATEFUL DEAD concert was the night before on Dec 4th. I was 16 years old. Everyone in NYC was trying to get in to these shows.

There were only 3500 seats in the Felt Forum. The streets were packed with people looking for tickets and scalpers were everywhere. I remember clutching my ticket as I went by the people begging and screaming "I need a Ticket" thinking, I am so lucky I've got a "TICKET, I'm in, and I've got a seat!".

Nothing like a GRATEUFL DEAD show in NYC in 1971. The crowd was wild. Freaks, Hippies, Weirdo's and
Counter Culture Anarchists. I think I saw Bill and Hillary at this show, or someone that looked a lot like them...(just kidding)

Thanks for the love from 38 long, strange years ago.

PS: And to those of you who were not alive to see the GRATEFUL DEAD at the Felt Forum in Manhattan in 1971, you have to ask yourself why GOD would do such a thing to you...and not to me?